How to prepare Curriculum Vitae

Text from PC Powered by Google

How to create automatic Bibliography Reference in MS Word

how to compress video file

Why do we take screenshots?

Well there are many but few common ones are

But we often need to do more with these screenshots and use them.

Screen shots are the best method to save a picture

1. Use the keyboard shortcut: PrtScn (Print Screen) or CTRL+ PrtScn

The first method is also the best known and it works in all versions of Windows: on your keyboard, press the PrtScn (Print Screen) key or CTRL+PrtScn keys. Windows creates a screenshot of the whole screen and saves it to the clipboard. It is not stored as a file on your hard drive. Then, open an image editing or graphic program like Paint and paste the picture from the clipboard. The file can be then saved after some basic editing.

The screenshot of the whole screen  can be taken by Windows + PrtScn on your keyboard and it can save the image directly to a file. Windows stores the screenshot in the Pictures library, in the Screenshots folder. The file is named “Screeenshot(number).png,” where the number will vary based on how many screenshots you have taken.

In Windows, to take screenshots of the active window, press Alt + PrtScn on your keyboard. The screenshot is saved to the clipboard. Open Paint or any other photo editing software and paste the image so that you can edit it and save it to your Windows computer or device.

The screenshot is saved to the clipboard. Open Paint or any other photo editing app and paste the screenshot so that you can edit it and save it.

There are many extension tools available on Google chrome for screen shot capture. One of the best extension is  Awesome Screenshot. It can installed from chrome://extensions/. It is Annotation tool for your screenshot and picture. 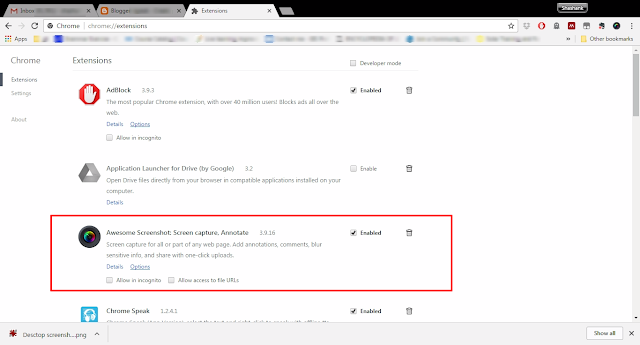 The app works for Chrome 36 and later versions.

2. Drag and drop a picture in the app to annotate

1. Annotate it with rectangles, circles, arrows, lines and text

2. Use eraser to hide sensitive information

1. Save to local disk

2. One-click to upload to awesomescreenshot.com and get a shareable link

Screenshot with an App

There is one very nice program that can capture screen shot and allows lots of other option. The name of the application is PicPick

It can be downloaded from https://picpick.app/en/download/

The features of PicPick are:

The details for each feature can be found at https://picpick.app/en/features